It’s weird and pissed off, whatever it is.

Mention swearing in films and the focus tends to fall on quantity: which film is the sweariest, how many fucks are there, what’s that per minute, and so on. But this is ultimately trivial; I find the quality of curses more interesting. One cult classic that’s less sweary than you’d expect but puts its strong language to memorable effect is The Thing.

John W. Campbell’s story ‘Who Goes There?’ was first adapted for film in 1951 as The Thing From Another World, a quirky B-movie with a flavour of Cold War distrust. Though this adaptation offers wit and melodrama, it feels inescapably quaint to modern audiences, and suffers from that era’s technical constraints. The more obviously a monster is just a person in a suit, the harder it is to suspend disbelief – that goes for the actors too.

By the 1980s this had all changed. John Carpenter, a fan of Campbell’s story (The Thing From Another World is seen playing on a television in Halloween) was going through a purple patch when he was hired to direct a lean new script of The Thing written by Bill Lancaster, son of Burt. Spoilers follow below. 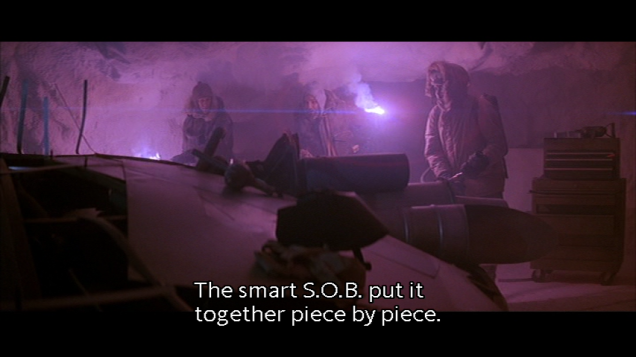 The opening scene proper of Carpenter’s film draws viewers in like a hunter’s trap. Antarctica, Winter 1982 reads the caption before a helicopter lurches across a vast snowscape, chasing a dog towards a remote research station. Context, atmosphere and mystery are quickly established.

The film isolates a dozen men in a dire predicament where cabin fever is soon the least of their worries. The monster they meet in the ice quickly undermines their normal interaction, or what passes for it in a polar outpost where the only hint of femininity is the voice of an electronic chess player – a machine soon grumpily soaked in whiskey. The radio fares little better:

The authenticity of the polar setting and the intense (if roughly sketched) mood help ground the film’s outlandish special effects. The creature’s elaborate grotesquery was state-of-the-art and wholly organic, made of foam rubber, latex, mayonnaise, assorted mechanics and goo. It holds up remarkably well today. So when Palmer sees a particularly eye-popping incarnation of the Thing scuttling across the floor, we share his astonishment as he drawls his immortal line:

The fuckin’ in “You gotta be fuckin’ kidding” is surplus to compositional meaning but crucial to the moment and the encounter. Its trochee supplies essential force to the line’s measured disbelief, extending Palmer’s (and by extension the group’s) appalled bewilderment at the boggling form of their alien enemy. 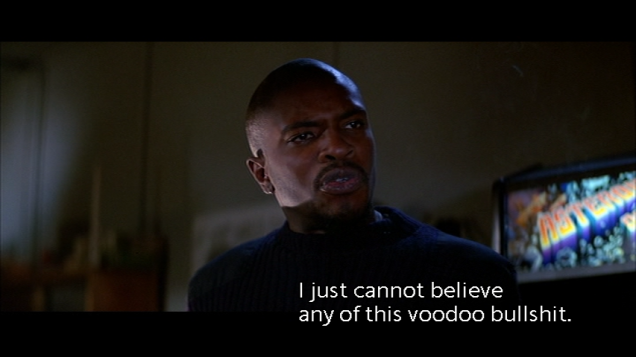 Once the creature’s nature as a shape-shifter is deduced, the group’s fear and aggression escalate rapidly. Panic and alienation rip through the paranoid microclimate, turning camaraderie and truces into expletive-laced hostility.

For a while no one, including viewers, knows who is human. Encroaching on the squabbles and anxieties are the elements themselves: outside, a storm is picking up. Things are about to get a whole lot fucking worse.

The Thing wasn’t quite a flop on release, but it took time to find its audience and revolted many viewers along the way. Having to compete with E.T. didn’t help: moviegoers favoured Spielberg’s reassuring fantasy and its friendly, healing alien over Carpenter’s uncompromising film with its downbeat tone, horrifying Thing, and obliquely apocalyptic vision.

Few horror films of any age generate such an enjoyable sense of menace and claustrophobia and such a fantastically frightful monster. Its macho ensemble delivers a handful of fucks and screws, several shits and bullshits, some blasphemies and coy euphemisms (geez [i.e., Jesus], S.O.B.), lots of damns and a motherfucker or two. But what the cursing lacks in quantity it more than makes up for in emphatic and dramatic effect.

The Paris Review follows up on this post, with Dan Piepenbring commenting: “an utterance in John Carpenter’s The Thing helped define our sense of a treasured obscenity”.

10 thoughts on “Great moments in swearing: You gotta be fuckin’ kidding”