For your weekend reading pleasure, a bumper batch of sweary shit from around the internet. You may have seen some of these items before, especially if you follow @stronglang on Twitter, but I bet there’s something new here even to devotees.

Romance writer KJ Charles has a great defence (and examination) of swearing in fiction, showing its importance in conveying character and mood, among other things.

There’s been a lot of anger and sarcasm in bookish circles at the ‘Clean Reader’ app that (ineptly) replaces profanities and vulgarities with sanitised alternatives: ‘chickenshit bullshit’, as Strong Language‘s @VoxHiberionacum pithily described it. Lionel Shriver has a smart response in the Guardian:

What is being protected is an idea of yourself – as pure, untainted, unworldly, literarily chaste. Why, if evangelicals in Idaho didn’t know these words already, they wouldn’t be sufficiently acquainted with the terms to be offended by them. So this app offers up a fictionally pristine self. It services a vanity.

Transport for London has a series of posters with poems on etiquette. Here are BuzzFeed readers’ sweary versions.

Imagine waking from a nine-day coma addicted to cheese and swearing. It happened to this British teenager. Or as one wit remarked, ‘welcome to adulthood, kid!’

A student was kicked off a Southwest Airlines flight in the US for wearing a shirt with a swearword on it.

From the Letters of Note archives, a sweary pun brightens a diplomat’s day.

An Aboriginal girl in Sydney was violently arrested for swearing, and committed suicide three days after she was found not guilty of resisting and hindering police.

‘The Girls on Shit Duty’ is a lovely essay by Anna Maxymiw on working with shit (and shit).

Pute de merde de con! An interesting look at translating swearwords and slang from French to English in the TV drama Spiral.

‘Sometimes there’s nothing else to say, but Sheeeee-it.’ Isiah Whitlock, aka Senator Clay Davis in The Wire, reflects on the birth of a sweary catchphrase.

A playground chant that’s extremely sweary – or is it?

Vowels and consonants: Language Log shares a cartoon on cursing and a mouth-watering archive of sweary linguistics.

Crapper, skiter, cacafuego, and other historical slang terms for bullshitter (by our own Jonathon Green).

A Twitter account by the name of @SimonSwears, presumably a bot, offers a new insult every hour. There are over 170,000 so far. Many aren’t sweary, or even particularly insulting, but there’s something here for everyone – even fishy fuckmonkeys.

Finally, in a variation on an old theme, this very TL;DR copy of the Bible. 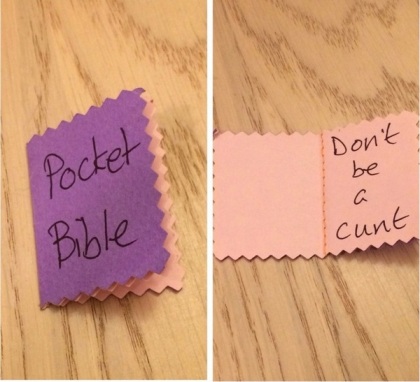