“Initials to that effect“: The famously prissy New York Times not only avoids printing swear words, it won’t even print “WTF.”

“What not to swear“: A 2010 report from New Zealand’s Broadcasting Standards Authority on the acceptability of words on the air. (tl;dr: Here’s a handy chart.)

“Fuck the Internet”:  Harper’s Magazine, the oldest general-interest magazine in America (since 1850), keeps almost all of its content behind a paywall. (The publisher, John R. MacArthur, defended the policy in a 2014 interview.) If you’d like to support the cause, or just indulge in a little épater le bourgeois, you can do so with a no-uncertain-terms coffee mug. 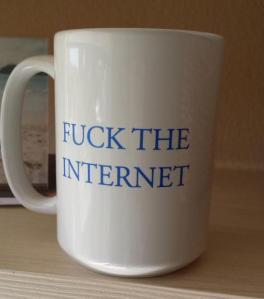 “This shit is going to be delicious“: Maybe you’d fancy an apron to accompany that mug? (Hat tip: Kory Stamper.) 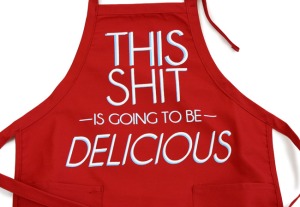 Adobe’s B.S.: “THIS IS BULL SHEET” reads the headline on Adobe’s full-page ad in the business section of the New York Times on Tuesday, April 9. Read all about it!

“Is my boyfriend bad news?” Fuck, yeah. “Tell this cocksucker to get gone for good, tell him to fuck himself permanently and forever, and go forward and seek men cut from a far finer fucking cloth.”

They may want to rethink their logo. pic.twitter.com/YvNkDSPdRY