In a post last month on the versatility of fuck, Rob Chirico wrote that the word has ‘escaped and run from the confines of its sexual root’. That is, most current uses of fuck are independent of sexual meaning. But it’s an incomplete escape. All words shimmer with connotations and the shadows of former and parallel meanings, so ambiguity inevitably creeps in now and then.

The polysemy of fuck (and other swearwords) can be exploited deliberately for entertainment – in jokes, comics, innuendo, and so on. Accidental confusion, by contrast, seems rare. This is because semantic, pragmatic and prosodic context normally provide more than enough information to indicate whether the word is meant sexually or not.

So I was struck by a concrete example of this fucking confusion, even though it was fictional. It appears in Michael Connelly’s suspense novel Chasing the Dime (2002), for which minor spoilers follow in the next paragraph and indented text below.

The protagonist, Henry Pierce, has just been attacked by a small boss-man, Wentz, and his hulking henchperson, who then dangled Pierce over the balcony of his coastal apartment. Wentz runs ‘a burgeoning empire of Internet sleaze’ along with illicit escort services, and Pierce has already scouted one of his insalubrious venues. These background details, combined with Pierce’s hazy post-assault cognitive state, allows for a scenario where fucking can be genuinely ambiguous between native-English speakers:

‘You got a nice view here,’ said the smaller man. ‘What do you pay?’

‘Jesus Christ! I can get three fucking places for that.’

Now just straddling the edge of consciousness, Pierce wondered how Wentz had intended the word fucking to be interpreted. Was he talking about places for fucking or was he just routinely cursing?

The matter was not resolved, and I didn’t mind. Connelly was just having some fun.

More to the point: the ambiguity of fucking seems to arise very seldom, and I can only think of contrived or anecdotal examples, generally humorous. There’s a joke based on ‘fucking Goofy’, an analogous quip on Reddit (Fuck ’em in response to a sexual proposition by a third party), and an xkcd cartoon with a fucking jacket very similar to Connelly’s fucking place: 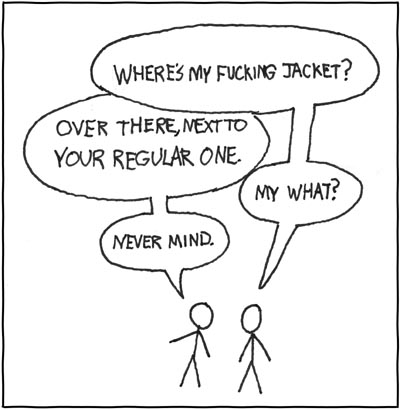 All of these are manufactured cases, and I’d be interested in others, borderline or not. But even better would be a true-blue, naturally occurring fuck-related ambiguity – especially (but not obligatorily) between native-English speakers. That would be the fucking business.

I mean, that would be the fucking business.

‘You hear the one about the great North Dakota artist?’ Simmons whispered in a low voice. In Montana, what the rest of the country calls ‘Polack jokes’ we set in North Dakota.

‘The North Dakota Historical Society hired the most famous painter in the state,’ he whispered even more quietly, ‘to paint a giant mural depicting the Battle of Little Bighorn, and when he finished, they had this big party for the unveiling, all these fat-cat preachers and society matrons gathered to see the finest work of North Dakota’s greatest painter. But when they pulled back the curtain, there was this picture of a huge goddamn fish with a halo over its head surrounded by thousands of Indian couples balling.

‘Of course, all the fat-cat preachers swallowed their snuff and all the society matrons peed in their girdles and everybody went charging out of the room in a great North Dakota huff. So the president of the historical society goes over to the artist, who has been too busy admiring his work to notice the fuss, and he says to the painter, “What in the world do you call this?” And the painter smiles and says, “‘Custer’s Last Words.'” “‘Custer’s Last Words’?” the president says. “Right,” the artist says, “‘Holy mackerel, I’ve never seen so many fucking Indians.'”

And here’s one in Lisa McInerney’s 2017 novel The Blood Miracles: