Sometimes a gesture can convey a message more satisfactorily than words. Why tell someone to fuck off when you can just give them the finger? We like to think that gestures can transcend language, or that they are a more universal form of communication, but we only have to look at the difference in the offensive gesture repertoire of North American and UK English speakers to know this is not true. In fact, Americans are deprived of a particularly satisfying offensive gesture, and it causes much mirth for Brits, Australians and New Zealanders.

The ‘up yours’ gesture is made with the index and middle finger raised and parted, and the palm facing towards yourself. It has similar connotations to the ‘middle finger’ gesture, but with an added element of defiance. The hand may be moved up and down for added effect. The gesture is demonstrated by this besuited chappie: 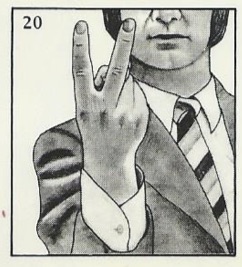 In a survey of gestures in Europe in the 1970s, Desmond Morris and his team found that this gesture was almost exclusively found in the British Isles. It is also used in Australia and New Zealand. Folktales of its origins abound, the most popular being that when the English bested the French in The Hundred Years War with their fancy high-tech longbows, the V hand shape of the archers lining up their arrows became a battle gesture. There is no evidence to support this story, and quite a lot of evidence to contradict it, although that doesn’t stop the story being told.

If you’re unfamiliar with this gesture it may remind you of the Peace Sign. They form a gestural minimal pair, in that they only differ with regard to one feature. The hand-shape and vertical orientation are the same, but the orientation of the palm is different. In the same way that the innocuous word fug differs from the nocuous fuck by only one pronunciation feature; just a small change turns a gesture from benign to offensive.

The Peace Sign has its own history. In World War Two The Allied Forces instituted the gesture to represent a ‘V for Victory’. There are images of people across Allied territory making the gesture with the palm either inwards or outward, although outward became the more common orientation. In an interesting twist of semantic fate, the gesture was co-opted by the peace movement and given a meaning make-over. This gesture has much broader recognition than the ‘up yours’ gesture, especially in North America.

Britain’s Wartime Prime Minister was Winston Churchill, who was an articulate and formidable leader. He embraced the Victory gesture, and is seen with his fingers aloft in many images of the time. In quite a few of those images though his palm is facing inwards instead of outwards: 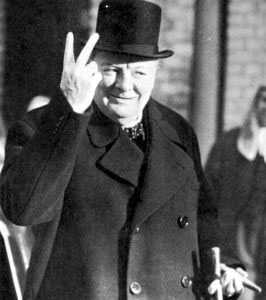 Image on the left from WikiMedia, on the right from V for Victory.

Some argue that his aristocratic background meant that he was unaware of the primary meaning of the palm-inward version in Britain and was innocently performing it like many other Europeans.

The more likely explanation is that Churchill was all too aware of the meaning of this gesture. John Colville, Churchill’s private secretary, noted in his diaries that “The PM *will* give the V-sign with two fingers in spite of representations repeatedly made to him that this gesture has quite another significance”.

If this is true, Churchill cheekily exploited the gesture to signal to the Allies that the British were against the Germans, while also garnering support at home. The gesture could simultaneously mean  ‘Victory over the Germans’ and ‘Stick it up the Germans’. The ambiguity allowed Churchill to insult the enemy without the enemy even being aware of it.

While Churchill knowingly exploited the minimal difference between the ‘up yours’ and ‘V for Victory’ gesture, in subsequent decades many North Americans have perhaps not been as aware of their cross-cultural gaffe.

I leave you with two images. The first is of Justin Bieber, who is frequently photographed performing this gesture with apparently no understanding of its meaning for his BritBeliebers. The second is of George Bush Senior. When George Bush Sr. Bush Sr. visited Australia in 1992 he attempted to be friendly to a bunch of protesters in Canberra by giving the Peace Sign out of his limo. Unfortunately he presented with the palm facing inwards and probably did a lot more damage than if he just left his hand inside the vehicle. 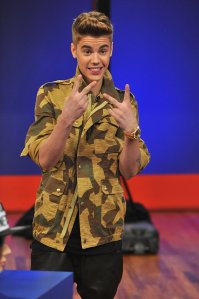 The Biebs via PopSugar 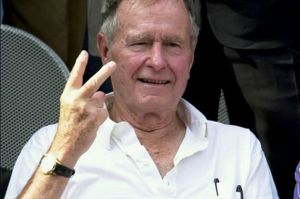 George Bush Sr. via The Mirror

39 thoughts on “Up yours: The gesture that divides America and the UK”