We’ve looked at swearing in films before, in the obvious sense where it occurs on the audio track. But sometimes films offer visual swears, a few examples of which are presented below. Visual swears may be remarked on or alluded to in the dialogue, or they may not; they may be props, used for colour and characterisation, or they may serve comedic aims, or some combination of the above.

Here’s one that contributes to both contextual humour and characterisation: Rooney Mara’s delightful FUCK YOU YOU FUCKING FUCK T-shirt in David Fincher’s remake of The Girl with the Dragon Tattoo (2011) (click images to enlarge):

Finally, and most elaborately, there is Michael Davis’s gleefully offensive, gun-obsessed Shoot ’Em Up (2007). On a rooftop near the end of a chase sequence we see a large and improbably positioned neon sign for FAULK TRUCK & TOOL. This image from behind-the-scenes footage shows it in full: 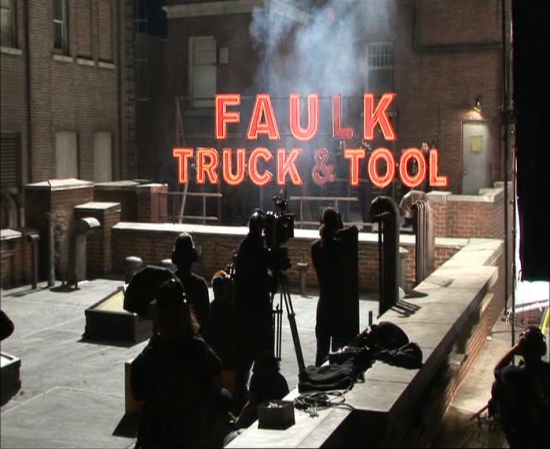 No-nonsense anti-hero Clive Owen, in a shoot-out with his nemesis Paul Giamatti and his goons, selectively shoots the sign’s letters to leave FUK U (initially framed to obscure the TOOL):

His attendant quip, like Mara’s T-shirt above, gets straight to the point:

Giamatti, foiled and frustrated by Owen’s subsequent escape, shoots the L from TOOL in reply: 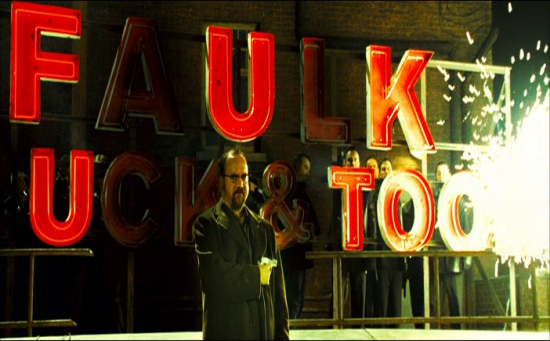 You can watch the scene in full here. It’s NSFW, obviously, and also Owen is carrying a (fake) baby, which might bother some viewers:

Let us know of any other examples you can think of. Images get bonus points.

A classic slogan on this T-shirt worn by an extra in the 1985 thriller Runaway Train:

Boots Riley’s 2018 comedy Sorry to Bother You features an art exhibit titled ‘The New Fuck You’ on posters:

Danny Glover’s character is a fan:

18 thoughts on “Visual swears in film”