In The Emperor of All Maladies, his best-selling 2010 “biography of cancer,” Siddhartha Mukherjee tells the story of Fanny Rosenow, a breast cancer survivor who in the early 1950s wanted to place an ad in the New York Times for a breast cancer support group. Her query was routed to, of all people, the society-page editor, who expressed regrets. “The Times cannot publish the word breast or the word cancer in its pages,” the editor primly informed Ms. Rosenow, adding that perhaps the ad could be reworded to say “a meeting about diseases of the chest wall.”

We have, needless to say, come a long way in 60 years. Not only is cancer no longer a shameful secret, it’s the frequent subject of movies, TV shows, and comedy routines (collectively known as cancertainment). More to the point of this blog, “Fuck cancer” has become an embraced (if sometimes slightly censored) and widely monetized meme that’s seen in a popular hashtag, in the title of a recent Irish documentary, and in the names of three unrelated charitable organizations in North America.

From “the great unmentionable” (as Mukherjee puts it) to the greatest of four-letter words. How did it happen, and why?

“Fuck cancer” was officially transformed from a privately muttered oath to a public proclamation in 2005, when the Fuck Cancer Foundation was founded in Huntington Beach, California, by Brandon McGuinness, a surfer and snowboarder who’d been recently diagnosed with Hodgkin (also known as Hodgkin’s) lymphoma. McGuinness died two years later, at 26; the foundation is now run by Mugs McGuinness (his cousin) and Eric Frega, a cancer survivor.

The foundation suffers from a bit of identity confusion: Its web address is fuckcancer.org (yes, you can use obscenities in URLs), but the web content self-refers, variously, to FC Cancer Foundation – not clear what the extra “C” stands for – and Fxck Cancer; the logo replaces the U in “fuck” with a skull and crossbones. It’s a 501(c)(3) nonprofit, but the name doesn’t have trademark protection. (More about trademark in a bit.)

Naturally, there is merchandise.

Fuck Cancer, or Fxck Cancer, might have remained a minor local phenomenon if not for social media – and especially Twitter, which was founded in 2006. The invention of the hashtag, in an August 23, 2007, tweet by Chris Messina, paved the way for social-mediated cause promotion, including, in mid-2009, the semi-spoofy #blamedrewscancer, invented by tech writer Drew Olanoff. Olanoff, then 29, had been diagnosed with Hodgkin lymphoma, and he used the hashtag to spread awareness and raise money for cancer prevention. (After five years of remission, Olanoff’s cancer returned last year; he’s getting treatment and planning his wedding.)

It was around this time, in 2009, that I started noticing the briefer, more pungent #fuckcancer hashtag on Twitter. The source wasn’t @FxckCancer, which didn’t join Twitter till January 2010. Rather, it came from spouses and friends of people diagnosed with cancer. #fuckcancer succinctly expressed their anger, frustration, and pain.

Interestingly, although other diseases also cause anger, frustration, and pain, only cancer seemed to merit a fucking hashtag.* Maybe it’s because cancer can strike with what appears to be cosmic unfairness: 26-year-olds, newlyweds, little kids. Also —and I say this as an observer rather than a participant — every single treatment modality is fucking miserable. So, yeah, #fuckcancer.

Back to our timeline: In March 2008, a jewelry designer in Vancouver, British Columbia, named Susan Fiedler, who had been treated for non-Hodgkin lymphoma, began making and selling bracelets inscribed “Fuck Cancer Embrace Life.”

Fiedler launched a website, the euphemistically named (or perhaps just pragmatically shortened) FCancerEmbraceLife.com, that announced a dual purpose: “to encourage people living with cancer to embrace the fullness of life” and to raise funds “for cancer causes.” The About page explains the name, or at least part of it: “Why F Cancer™? Big battles need big words; living with cancer demands courage, self-awareness and that secret source of power — a sense of humor.”

That ™ symbol is slightly misleading: According to a March 2015 CBC story, Fiedler had never registered the F Cancer mark or any of the other phrases she claims to have registered. And therein lies a legal quagmire.

In 2009, another Vancouver woman, Yael Cohen, started another Fuck Cancer after her mother was diagnosed with breast cancer. (In 2014, Cohen married Justin Bieber’s manager, Scott “Scooter” Braun.) This Fuck Cancer — the URL is LetsFCancer.com — claims to be “changing and impacting the cancer space [sic] by improving health outcomes through digital initiatives, programs, events and cutting edge research.”

You can buy a Fuck Cancer T-shirt, with a rotated awareness ribbon replacing the C and K in “fuck,” in the LetsFCancer store. The blue ribbon represents colon cancer; the shirts are also available in other symbolic colors

That took care of one conflict, but the one with Susan Fiedler’s company, Fuck Cancer Embrace Life, remained. Back in 2010, when Cohen Braun attempted to register “Fuck Cancer & Design” as a trademark with the Canadian Intellectual Property Office, Fiedler challenged the move. The Trade-Marks Opposition Board held in Fiedler’s favor, even though she’d never registered her brand name, finding, as the CBC’s Jason Proctor wrote in November 2014, that Fiedler “had used the phrase in Canada prior to Cohen and that there was substantial similarity in sound, appearance and idea between them.”

But Cohen Braun didn’t give up. As Proctor relates, she applied for a review of the board’s decision, advancing a novel argument: that no one should be able to claim trademark protection for the phrase because of the obscenity. (Canada’s Trade-marks Act prohibits recognition of any trademark consisting of a “scandalous, obscene or immoral word.” So does U.S. trademark law, but as trademark lawyer Anne Gilson LaLonde has pointed out in her posts for Strong Language, the definitions can be subjective.) The federal judge in the case, Anne Mactavish, rejected Cohen Braun’s application and awarded Fiedler $5,000, observing rather acerbically:

For Ms. Cohen to argue that the trade-mark she herself applied to register is scandalous, obscene and/or immoral only after she has been unsuccessful in the opposition proceedings justifies an elevated award of costs.

In the latest installment of the story, Fiedler filed a civil claim in British Columbia Supreme Court to stop Cohen Braun and Greenberg from infringing on her trademark. As of early November, the case was still unresolved.

What, you might wonder, accounts for the fierce attachment to a single two-word swear? Part of it is demographic: The cancer-activism torch has been passed to a new generation — Fanny Rosenow’s spiritual grandchildren – who aren’t about to mince words when they’re outraged.

And yes, the actual, RTE approved hashtag is #fuckcancer. 😎🙌🏻💁🏼

Louise McSharry, a DJ and columnist for Ireland’s RTÉ2, learned she had Hodgkin lymphoma in 2014, when she was 31. A year later, she celebrated her wedding and the airing of a documentary she’d created about “the good, the bad and the ugly of cancer treatment.”

Another factor is the backlash against what the journalist Barbara Ehrenreich famously called Cancerland, with its “cult of pink kitsch” (in the case of breast cancer). Two weeks ago, to mark the end of National Breast Cancer Awareness Month, the New York Times reported on “a growing disenchantment with October ‘pinkification’.” “I call it the puke campaign,” one breast cancer activist was quoted as saying. It’s not just #fuckcancer, it’s Fuck Those Fucking Teddy Bears and Those Pink Ribbons and the Horse They Rode In On.

But don’t get too comfortable: there are signs of resistance to #fuckcancer. That’s right, a backlash backlash. 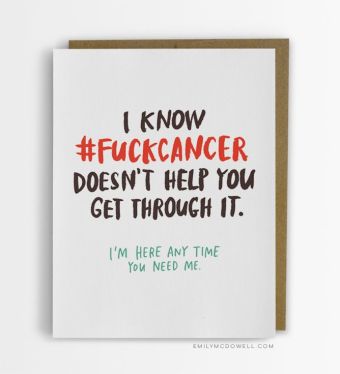 An “Empathy Card™” from Emily McDowell Studio. The message inside reads:

“Fuck cancer.” Who can disagree with that? Not me. Seriously, fuck cancer. I could hashtag it all day long. I really appreciate visibility and fundraisers and running for the cure. But I also know that hashtags and fundraisers and “fuck cancer” don’t help all that much with the loneliness and isolation that can come with having cancer.

Things that DO help: Friends and family who lovingly, unconditionally show up for the hard stuff.

Sometimes, in other words, even the F-word is fucking inadequate.