On January 8, attendees at the American Dialect Society’s annual meeting, in Washington, D.C., selected they — a “gender-neutral singular pronoun for a known person, as a non-binary identifier” — as the word of the year for 2015.

You can read good arguments for singular they in the blog of Dennis Baron, a professor of English and linguistics at the University of Illinois at Urbana-Champaign; and in an explainer that Strong Language contributor Gretchen McCulloch published in The Toast.

But here at Strong Language we’re more interested in the WOTY undercard, which this year was replete with sweary words … and even a naughty emoji. It was, according to our research, the first time in four years that a sweary word made it onto the ballot — assholocracy was voted the “Most Outrageous” word of 2011 — and the first time in ADS history that any variant of fuck was nominated.

First, though, a little background.

The 125-year-old American Dialect Society (ADS), whose members include linguists, lexicographers, grammarians, writers, and other wordly folk, has held a Word of the Year vote annually since 1990. (The first WOTY was bushlips.) Nominations are made in multiple categories: Most Likely to Succeed, Least Likely to Succeed, Most Useful, Most Creative, Most Unnecessary, Most Outrageous, Most Euphemistic, and — new this year — Most Notable Hashtag and Most Notable Emoji. Formal nominations were submitted on January 7 (the full list is here), and additional nominations were accepted from the floor the following day.

In the Most Outrageous category, fully 50 percent of the nominees qualified as sweary.

The winner by a decisive margin: fuckboy/fuckboi (sometimes spelled fuccboi). As Stan Carey noted in a footnote to his August 2015 post on mapping the United Swears of America, linguist Jack Grieve had identified fuckboy as the top rising word on Twitter in 2014. 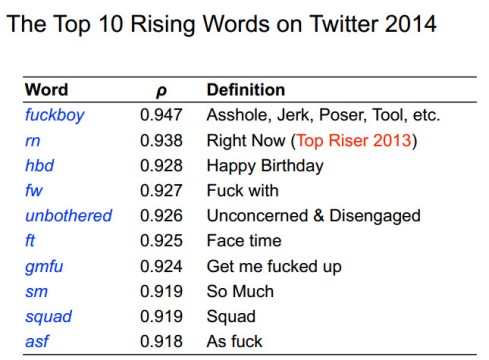 As you can see, the ADS’s definition of fuckboy is only partial. Last year, in a long exegesis in Slate, Jacob Brogan noted that Urban Dictionary has more than 300 definitions for all spellings of fuckboy, including “a person who is a weak ass pussy that ain’t bout shit.”

Category runner-up schlong — the verbified form of a vulgar Yiddish word for penis — made the news when Republican presidential candidate Donald Trump used it in December to describe Hillary Clinton’s defeat by Barack Obama. The usage earned him also-ran status in Strong Language’s first Tucker Awards for excellence in swearing.

Our side had another winner in the new Most Notable Emoji category.

Yes, the phallic purple fruit — its proper Unicode label is aubergine — trounced its opponents, prompting a happy-dance display on the conference screen.

Is that a purple fruit commonly mistaken for a vegetable or are you all just happy to be there? #WOTY15 https://t.co/1IsEALj3kT

(Last month, Gretchen McCulloch speculated about whether the eggplant could be an infix, as in abso

Remember asf from the list of rising words on Twitter, above? It was trounced in the final vote for More Euphemistic; Netflix and Chill was the overwhelming favorite.

But maybe it just deserved a different category.

Guys, I high-key like af. It’s useful af. But acronyms are not really euphemisms. #woty15 #LSA2016

Finally, how many fucks did ADS give about zero fucks given (ZFG)? 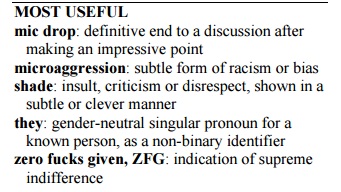 Not many, it turned out: it placed third, after they and microaggression. We think it deserves a little more love; we commend you to John Kelly’s September 2015 post “Something from nothing: a zero-fucks game.”

For a global perspective on words of the year, see OUPblog, which surveys the WOTY scene in Malaysia, South Africa, China, Germany, and elsewhere. No swears in evidence, though.

8 thoughts on “A very good year for swears”