Before there was the World Wide Web, there were libraries and bookstores. In high school I loved crawling the shelves of the Banff Book and Art Den, discovering books that would shape my view and style. Kurt Vonnegut, for instance, and Spike Milligan.

Before there was Twitter, there were bathroom walls and similar public surfaces whereon could be etched – or markered or spray-painted – comments on life and sundry witticisms (often recycled).

At the junction of these two was Nigel Rees and his series of books of collected graffiti from around the world, published 1979–1982. I discovered them in the Book and Art Den. They informed my sense of humour (I still use some of the jokes from them) and they instructed me on British swearing patterns and cultural references (such as the “[name] rules, OK” graffiti common around the Sceptred Isle at that time).

Nigel Rees was – is – a BBC luminary, host of the Radio 4 quiz panel show Quote… Unquote. He has collected books of quotations and phrases and anecdotes and such like. Quite a few books, in fact; somewhere north of 50, I believe. I don’t have most of them. But I’ve read Graffiti Lives, O.K., Graffiti 2, Graffiti 3, and Graffiti 4 quite a few times (although only once in the past decade).

Most of the graffiti assembled in these volumes is not vulgar. Rees was not collecting photos of four-foot-high FUCK spraypaintings. But where crudity is used, it is as toothsome and nourishing as crudités. I gained some of my favourite (and often-used) witticisms from these books – most of which are credited to the place spotted, thereby introducing me to many English place names theretofore unknown to me. Try these (I’ll cite them with volume and page number):

Fighting for peace is like fucking for virginity.
Covent Garden [1:40]

I like sadism, necrophilia and bestiality. Am I flogging a dead horse?
[1:72]

Arrange the following words into a well-known phrase or saying: OFF PISS
[2:101]

Yes, some of them were collected from the colonies!

What do you get when you cross a vagina with a silicon chip?
A. A cunt that knows everything.
London W1 [3:118]

Why do people write ‘Fuck the Pope’ on toilet walls?
A. Because they can’t be bothered to write ‘Fuck the Moderator of the General Assembly of the Church of Scotland.’
Edinburgh [3:140]

Genitalia is not an Italian airline.
University of Exeter [4:71]

Most of the text in the books is plain text. Some is in imitation of writing. In some cases it’s just for effect, but sometimes the illustration is necessary, as with the instance in book 2 (page 107) that is introduced,

A lavatory wall at a university had recently been whitewashed. Within days, someone had divided up the wall into three columns for future graffiti, marked ‘Sport’, ‘Politics’ and ‘Sexual Deviations’. After another day, somebody else had written under each heading: 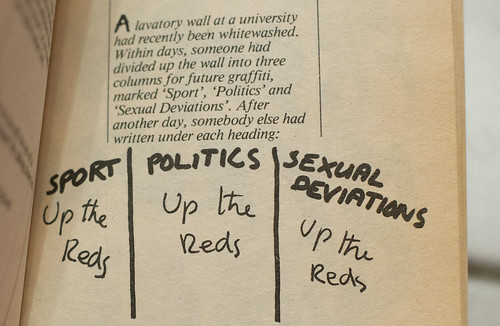 Some of the entries acquainted me for the first time with important cultural references. I had never heard of Georges Braque until I read

and now anytime I see his art, that is the first thing I think. (I do like his paintings, though.) Likewise, I first became aware of the gallery in Florence when I read this:

There was a young man in Florence
To whom all art was abhorrence
So he got slightly tipsy,
Went to the Uffizi,
And peed on the paintings in torrents.
The Uffizi, Florence [2:58]

It was through these books that I first came to know the word wank, which has more recently gained some currency on this side of the pond:

Whats the difference between an egg and a wank.
A. You can’t beat a wank.
Cardiff [3:54]

I would never have known there was some mule called Muffin if it were not for this:

IS MUFFIN THE MULE A SEXUAL OFFENCE?
– no, but you might get Moby Dick.
Sussex University [2:92]

Similarly, I was able to infer that Radox is something like Epsom salts, and that Louis Frémaux was a musician.

What is the difference between a Radox bath and Louis Frémaux?
A. Radox bucks up the feet.
Birmingham [3:104]

Actually, he was the conductor of the City of Birmingham Symphony Orchestra. Yes, that’s right, someone wrote coarse graffiti (well, implicitly coarse) complaining about an orchestral conductor. These are my people.

I learned, by implication, about a couple of advertising campaigns. Smirnoff had a rather sassy one that used the tag “until I discovered Smirnoff.” (See some examples, which of course in the early 1980s I couldn’t Google but I can now.) Here are some winning graffiti:

I thought Wanking was a town in China until I discovered Smirnoff.
[1:93]

I thought that an innuendo was an Italian suppository until I discovered Smirnoff.
Trafalgar Square Underground station [3:71]

I have used that joke (usually without the Smirnoff tag) many times since.

The other ad campaign was by Typhoo, which I had never heard of before but I easily inferred was a brand of tea. (I’ve since consumed many cups of it.) Their line was “Typhoo put the T in Britain.” I won’t go into how the country was by inference Briain before that (which is Gaelic for ‘Brian’s’). The more important thing is a fact that has plagued the inhabitants of one British town over the years, and especially in the days of spam filters:

If Typhoo put the T in BRITAIN who put the CUNT in SCUNTHORPE?
comprehensive school, Sussex [2:43]

Going along with that, there is the equally timeless question,

There were some entires in these books that I didn’t process properly at the time or for some time after, thanks to dialectal differences:

I think it was in Spike Milligan’s books that I became aware of sod as a verb meaning ‘bugger’ (generally figurative in use).

I also learned that root is used in New Zealand and, evidently, some parts of England to mean ‘fuck’. Years before Lynne Truss’s obnoxious book, I read this and was enlightened:

A kiwi is a creature which eats roots and leaves.
Palmerston North [4:96]

And this rather clever one, which must be displayed as it is on the page:

I likewise learned the phrase Balls to [X] from these books, exemplified in this great artwork: 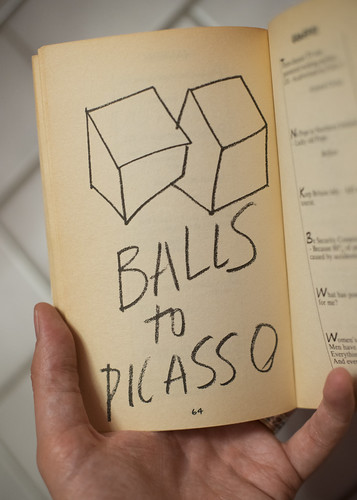 In a later volume came this sequel: 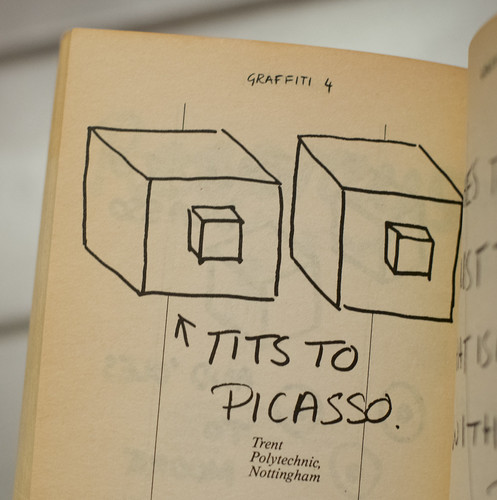 Thing is, though, I’d say they’re much more to Braque.

Paul Simon sang that the words of the prophets are written on the subway walls and tenement halls. Sod the prophets; some of the greatest instruction I got in British culture was written on bathroom walls – and much of it has since shown up on Twitter.