Linguist Geoff Nunberg considers the media’s coverage of the Donald Trump pussy-grab tape: “The word Trump used may not be the most obscene term for a woman’s genital area. But it’s the one that focuses on it in a purely sexual way.” (Also see our own posts on the subject: A Banner Day for Profanity, by Ben Zimmer; Pussy on a Hot Trump Mic, by Copy Curmudgeon; and Watershed Moments: Donald Trump, Rakeyia Scott, and the Times, by Blake Eskin.)

This is a Missouri gun shop called Tactical Sh*t pic.twitter.com/g3zmYzDDCz

Devour, a new line of frozen meals from the Kraft Heinz Company, is aiming at its target market — men age 25 to 35 — with the slogan “Food You Want to Fork.”

Gormed, what the deuce, and other para-swears from the pen of Charles Dickens, whose own surname is, of course, a mild swear. (The Millions)

Five fucking fascinating facts about swearing. (“2. Who you swear at matters.”)

“To an autistic preteen, it is confusing to hear ‘those words are wrong’ when the words appear to be socially acceptable in many contexts, including the playground and the middle-school bus ride.” So his parents taught him to swear correctly.

Chanting “fuck off!” at a marriage-equality protest does not constitute offensive behavior, said a judge in New South Wales, Australia.

We Have Concerns, a podcast created by Jeff Cannata and Anthony Carboni, took on (mostly British) swearing in a recent podcast. 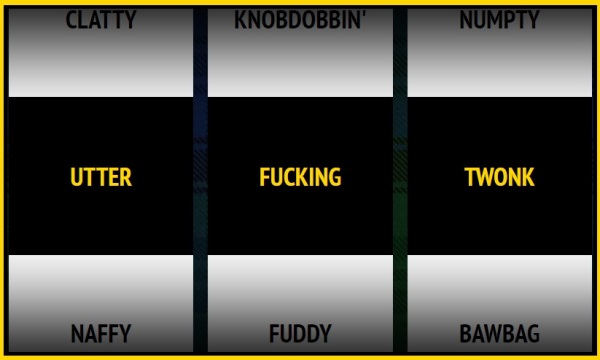 Not only did the travel-booking site Expedia cancel a Southern California woman’s holiday trip without her consent, someone at the company left a boldface “Fuck You!” on her itinerary page.

“Emmerder,” equivalent to “piss off,” is making its way into public life in France.

Two-thirds of millennials really like to swear while they’re at work, according to a study by Wrike, a project-management application. A third of them said swearing can help strengthen a team and reflects passion for their work.

How things are in the Daily Telegraph newsroom @OHnewsroom pic.twitter.com/pnOzeJ3Xqm