A journalist like Joseph Mitchell looks at an anti-profanity powerhouse like A. S. Colborne from one angle, as he did in “Mr. Colborne’s Profanity Exterminators.” Mitchell’s Colborne is an eccentric committed to the eradication of all profanity and even euphemisms for profanity. His profile, while gentle, nonetheless portrays Colborne as hopelessly optimistic about profanity prohibition. Mitchell’s essay is compelling but unsettlingly coherent. What did Colborne and the Anti-Profanity League look like to others before 1941, when Mitchell’s article about him appeared in The New Yorker?

Colborne was everywhere you wouldn’t expect him, both in the flesh and in the papers. In July, 1908, readers across America encountered him as “A Modern Crusader” who, although his “agitation has heretofore been of the home circle sort, these days is doing strenuous stunts with his hobby. Boys and men have been hired by him to give out little pink slips which read thus: Don’t Swear.” When Mitchell ran into him, the “exterminators,” as the slips were called, bore a more complicated message. Also, Mitchell knew Colborne as “a portly old man,” but, in 1908, Americans saw him in his prime, as a portly young man. The Evansville Press claimed the article quoted was “Special to the Press,” but it wasn’t — it was widely syndicated, and not every paper misspelled Colborne’s name. 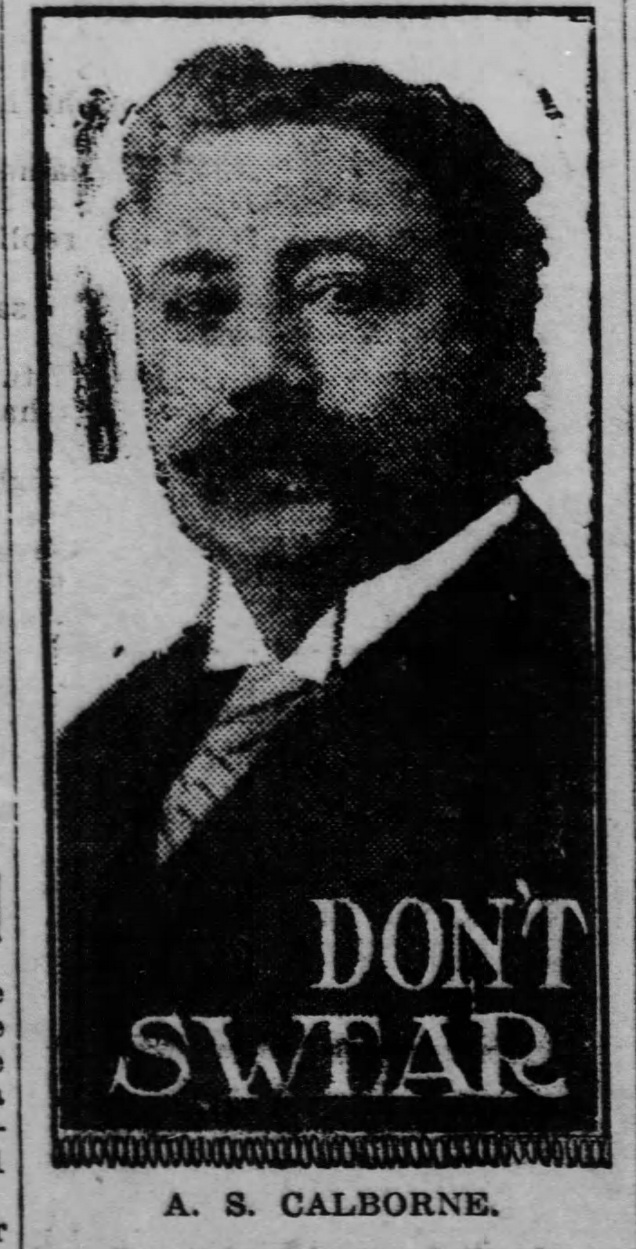 At a rally in Philadelphia on 10 February 1913, Colborne catalogued who swears and just how much:

Stevedores worst of all.

Base ball fans most picturesque vocabulary.

School children in need of reform.

I’ve copied the list printed in The Allentown Democrat the day after the rally, but it appeared across the country with minor variations — it’s the A. S. Colborne America saw in 1913. The Anti-Profanity League passed out exterminators at the rally, and “Men swore at each other as they fought to get” them, but that, of course, was before they had one of Colborne’s little reminders in hand.

In early January, 1911, Colborne spoke on swearing at a meeting of New York and New Jersey Teamsters. As The Sun reported on 9 January, he “distributed a number of cards with the words “Please do not swear or use obscene or profane language.” On 2 July 1911 — according the The Catholic Advance of Wichita, Kansas — he was speaking at the Missouri State Penitentiary, in Jefferson, Missouri, as the delegate of the Holy Name Society, to induct twenty-one new members from among the prisoners assembled in the prison yard. The Holy Name Society, as you might expect, protected said name from blasphemy and abjured swearing. After he was addressed by Charles Wright, Secretary of the St. Dominic’s Branch of the Society, “Mr. Colborne’s response was earnest and touching. He spoke of kindness as an incentive to reform [and] condemned profanity,” as he was wont to do. In September 1928, he visited Australia and, according to the Brisbane Courier (17 September), he “arrived in Sydney, a few days ago on a mission of verbal dignity … His league has 1,500,000 members in the United States alone, he declares, and has followers in almost every country in Europe.” He declares.

We also wonder, given reports from Sydney, whether the Anti-Profanity League’s mission was always as benign as it seemed to Mitchell during World War II, for Colborne had a closet crammed full of skeletons. While he was in Australia, Colborne “told interviewers” that “his work had received the recognition of the successive Popes, Leo XIII, Pius X, Benedict XV, and Pius XI, as well as of King Victor Emanuel of Italy and Signor Mussolini.” The popes were questionable, but 1941 was no time to flaunt one’s endorsements from Victor Emmanuel — the enabling King of Italy — and Mussolini, which is why Colborne didn’t tell Mitchell what he told the Australians decades earlier. So, if you thought that Colborne catered to grannies and milksops, or others offended by or squeamish about profanity, no, his anti-profanity message found favor with fascists and was partly concerned with making America great again, or, perhaps with respect to profanity, greater than it ever was.

Despite the big rallies and a certain measure of public acclaim, Colborne and the League were sometimes frustrated in their attempts at verbal hygiene. In 1911, Clyde Fitch’s play The City, though it had already seen the stage several times, inflamed those opposed to profanity and prompted them to action. As Frederick Boyd Stevenson explained in The Brooklyn Daily Eagle (12 March 1911), “There is a situation in that drama which demands strong action — a situation which Fitch, evidently, believed could be only portrayed by the use of what we today consider one of the most horrifying oaths in the swearer’s vocabulary.” I have read the play and cannot find anything that would horrify a twenty-first century audience. But Colborne and others objected. Alderman James J. Mulhearn, of the Bronx, introduced an ordinance to prohibit swearing on stage, with the League’s full support.

The measure failed, predictably. The Salt Lake City Tribune reported, a week later, that the assembled aldermen tried “to make light of the subject.” Alas, only “one alderman thought that modesty and morality could not be legislated into people, and that police censorship would not relieve the situation,” but, in the end, an aldermanic instinct to protect theater revenue was more influential than political principle. The Tribune also reported something troubling about Colborne, however: “Mr. Colborne stated that if the law is enacted the anti-Profanity league would volunteer to keep the police informed of any infraction of the statute so that there need be no fear of miscarriage in executing the law.” Such black shirt tactics align him more closely with Mussolini than one would ever expect from Mitchell’s profile. The extermination of profanity seems less benign when the cost is civil liberty.

Colborne was well-connected among New York City politicians. You find him on the Broadway Board of Trade’s Banquet Committee for 1901; in 1902, he was elected to the Board’s Executive Committee and appointed to the Membership Committee. Colborne was also a dedicated member of the Independence League, the political plaything of William Randolph Hearst, serving on the party’s Platform Committee in 1908, and that league held a banquet to honor Colborne later that year. With the light of the party guttering, he was present when the party met on Thursday, 19 August 1909, but The Brooklyn Daily Eagle reported that “As soon as the meeting was called to order, Arthur Eckroth announced that he had just learned that W. R. Hearst was to arrive in Manhattan … A resolution was then passed that the meeting be adjourned and that those present go over and give Mr. Hearst a welcome and they went.”

7 thoughts on “The Anti-Profanity League and A. S. Colborne in the news”