Fucky (also spelled fuckee or fuckie), sometimes reduplicated as fucky fucky or as part of fucky fuck, seems to have appeared first in representations of pidgin English, often in contexts of travellers or soldiers on their tours overseas being offered intercourse by local sex workers. The Oxford English Dictionary’s first citation is from Captain Edward Sellon’s 1866 autobiographical The Ups and Downs of Life:

“For make fuckee business, sahib, that girl who is splashing the other one would be too much good.”

But, unsurprisingly, most examples of this usage of fucky come later, in books about World War II or the Vietnam War:

But Baxter used a more eloquent language. He held a coin over my shoulder. The girl clutched for it, nodding vigorously. “Fucky-fucky.”

She used the word, absurdly baby-talk, that the whores used with the soldiers, “fucky-fucky.”

Around the same time, fucky also took on a lustful connotation or, as defined in Green’s Dictionary of Slang, “nubile, ostensibly sexually enthusiastic; usu. of a woman.”

Its first citation is from 1927—a limerick Gershon Legman documented in his first book:

A girl who lived in Kentucky
Said, ‘Yes, I’ve been awfully lucky.
No man ever yet
On my back made me get,
But sometimes I feel awful fucky’.

This usage comes up in Andy Warhol’s a:

Diana says she’s not allowed up here and I said and you would be if you wouldn’t bring all those fucky girls with you I said because we uh, we don’t, we don’t like feeling like freaks.

Purely sex-related usages of fucky have persisted in South Asia: Google Trends shows that searches for fucky occur mostly in Pakistan and India, usually as fucky images, fucky photos, or fucky videos—which make it pretty clear what users are looking for.

(Fucky also got a bump on Google Trends in 2014 when South African trio Die Antwoord released “Happy Go Sucky Fucky”—although fucky appears only in the title, not anywhere in the song.)

When a singular Fuck! isn’t enough, fucky, in various combinations including fuck, fucking, and fuckity, has been pulled into service as an intensifier:

More importantly, what in the fucky-fuck did I do to get partnered up with him?

—Searching for Michael Jackson’s Nose: And Other Preoccupations of Our Celebrity-Mad Culture According to Google Trends (2003) by Scott Feschuck

Fucky as “inadequate, broken, a little off”

The earliest citation (courtesy of Green’s Dictionary of Slang) I could find for this usage is from 1968:

It was just a fucky day. I quit.

But this contemporary North American usage, as entered in 2004 in Urban Dictionary—and now the term’s top definition—was popularized Bubbles of the Trailer Park Boys in the franchise’s second movie, Countdown to Liquor Day:

Although the film was released in 2009, “Something’s fucky” didn’t get memeified until 2012, after which, if FiveThirtyEight’s Reddit Ngrams are any indication, the popularity of fucky has grown steadily: 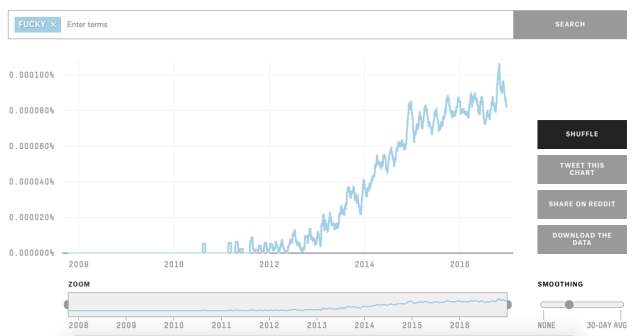 For me, this usage hits that sweet spot of being stronger than funny or fishy (while alluding to them with the [f] sound) but less emphatic and irreparable than fucked up (the [i] sound at the end injecting some casualness).

Fucky isn’t entered in Merriam-Webster Unabridged right now, but I have a feeling we’ll get there yet. 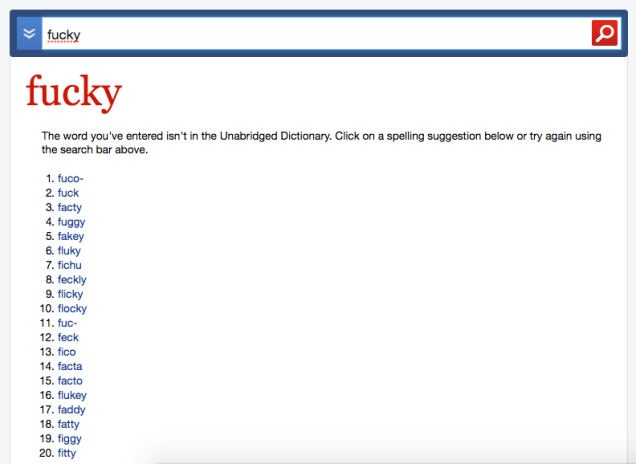