Fuck, shit, bollocks, twat, bloody, and cunt are not the seven words you can never say on television – they’re six words that Susie Dent has said on television. Susie Dent’s Guide to Swearing, a new mini-series from Channel 4, offers an informative and irreverent summary of the history and use of some of our favourite bad words. You can watch the full series below.

A word-history specialist and broadcaster, Dent has written several books on language, most recently Dent’s Modern Tribes. She is best known as the resident lexicographer in ‘dictionary corner’ on Countdown, a perennially popular British TV game show. We can’t not mention that Countdown inadvertently produces the odd rude word to great general amusement.

Everyone loves it when @susie_dent spots a rude word on @C4Countdown, don't they? pic.twitter.com/BuDs6PejeC

Though she went to a convent school and was not allowed to swear at home (aside from an occasional bloody that ‘managed to fly below the radar’), Dent tells me she didn’t rebel into foulmouthedness. She loves swear words but doesn’t swear often – except at moments of stress or pain, when it ‘most definitely helps’. There’s a word for that:

As a parent she now has to navigate the same tricky waters. Her youngest ‘has a mental list of taboos which she regards with awe and no little humour’, and, sweetly, thinks the c-word is crap – ‘or, more precisely, carp’. Her eldest ‘has just discovered the delights of swearing’ but is aware of her mother’s Guide to Swearing, so Dent concedes she’s on thin ice trying to admonish her.

Susie Dent is fascinated by swear words’ long and meandering lifespans: how cunt, for example, was ‘used openly in school text books and anatomy manuals’ before becoming strongly taboo. Fuck, she says, ‘can still have huge power if we want it to – “fuck you” in the right tone says it all’. And her favourite swear word?

Fuck I reserve for those situations where nothing else will do – usually because I’m cross with myself. But bollocks is so emphatically useful for anything that is sheer and utter rubbish. At a push, I’d go for that. 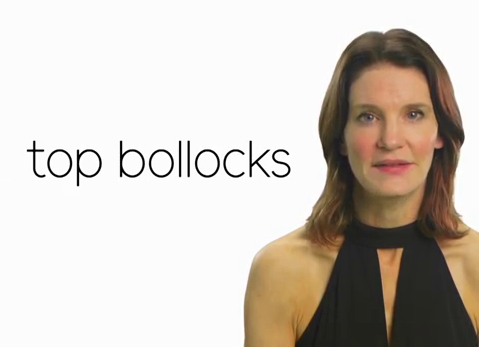 One of her favourite parts of the series was finding obscure alternatives to profanity. In the twat video, for example, we learn that crinkum-crankum is 17thC slang for something full of twists and turns – ‘including, as one dictionary of the time put it, a woman’s commodity’. To bescumber is ‘to spray poo upon’, from the sense of dropping a load or encumbrance, and was used by Ben Jonson: ‘Did Blocke bescumber Statutes white suite?’

These and other scatological pleasures await you in Susie Dent’s Guide to Swearing, courtesy of All 4 on YouTube. Each clip is just 3–4 minutes long, so you can watch the lot at a single bloody sitting.