In the two years since I first wrote about seeing “AF” — the abbreviation for the intensifier “as fuck” — in various interesting places, I’ve kept track of its spread from the fringes to the mainstream, or at least a major tributary of the mainstream, of popular culture. In April of this year, when I noted its use in New York subway advertisements by the food-delivery service FoodKick, I speculated that this was the first time AF had appeared in a commercial context. Well, I was wrong. It wasn’t the first. And it certainly hasn’t been the last.

This ad for Thinx “period-proof underwear,” with its ostentatiously hip vernacular, was one of several that the company placed in New York subways in May 2016. At the time, the campaign attracted attention not because of its language but because one of its models was a transgender man. (Not the model in this picture.)

The Thinx campaign lasted only a month. But it was an opening salvo.

In early July of this year, I began seeing a cryptic billboard near the San Francisco Civic Center exit from the westbound Bay Bridge.

Note, once again, the ostentatiously hip vernacular. (Lit, which once meant intoxicated, now means exciting, or merely excellent.) Leanplum describes itself more conventionally on its website as “email for the mobile era.”

On July 30, I opened an email from Everlane, the San Francisco–based clothing and accessories manufacturer, announcing the imminent arrival of new nylon backpacks.

Everlane evidently was proud enough of this locution that it repeated it when the bags became available for purchase.

And then, just as I was musing that I’d been seeing “AF” a lot but had never heard anyone say it, I started watching a new Netflix Original film, The Incredible Jessica James, and within the first 40 seconds our heroine (played by Jessica Williams) says this:

And she pronounces it as an initialism: AY-EFF.

Jessica is being sarcastic in this scene, but about 50 minutes later she says “AF” (AY-EFF) more sincerely.

How widespread is this usage and pronunciation? It’s hard to tell, but we have some clues. (And by we I mean my Strong Language colleagues Ben Zimmer, Blake Eskin, Gretchen McCulloch, Kory Stamper, and Stan Carey, who generously helped out with research and anecdotes.)

“A.F.” (with punctuation) has appeared since 2014 in Connie Eble’s “Campus Slang,” a long-running series of slang collected from students at the University of North Carolina Chapel Hill. Since Fall 2015, it’s appeared with a phonetic guide:  /æf/  Which means it rhymes with ideograph.

But a 2015 Buzzfeed poll found that “ai-eff” (aka AY-EFF) was almost twice as popular as “aff,” although neither pronunciation got much love. 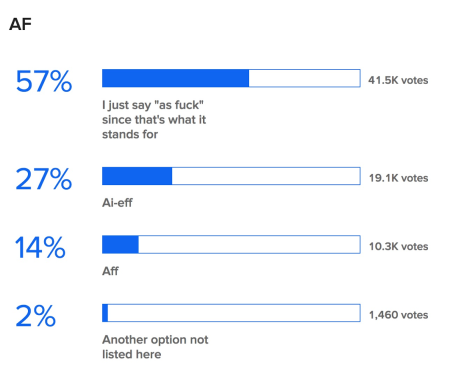 Has anything changed in two years? Well, in April 2017 Kory Stamper was interviewed by Terry Gross for NPR’s “Fresh Air” about her new book, Word by Word (which is both lit and literate, by the way). Here’s a bit of how it went down:

GROSS: So do you feel like as a parent and lexicographer you’re seeing how language changes generationally by listening to your own children?

STAMPER: Oh, absolutely. My youngest daughter just turned 17. And I’m the carpool mom for one of her activities. And what I will do is I will wait until all the teenagers get in the car and they get talking and they have sort of, you know, done the first five minutes of being used to being in the car with Mom. And then I will listen to the language that they use, the slang that they use. And as their season progressed, I got more and more comfortable with interrupting them and saying — wait a minute. Wait, what’s that mean? — or, oh, so you say, you know, she was nasty af (ph) instead of A-F. Is that how you say it? You say af? You don’t say A-F?

But! Here’s Gretchen McCulloch with another data point: “Just asked my own personal Young Person Whisperer (age 23) and she says she uses ‘af’ all the time but always pronounces it as the initialism, and that /af/ sounds totally weird. So it seems that there may really be a split here, possibly between teens and 20somethings?”

Or not, says Stan Carey: “Could geography be a factor? It was popularized online, and quickly, but only among a small proportion of speakers. So different groups, physically distant from one another, could easily arrive at different ways of saying it, given the options.”

Just to further confuse matters, in a new episode of the Observatory podcast (produced by Blake Eskin), graphic designer Michael Bierut tells a story about asking his own 20-something daughter how to pronounce AF. She says “aahf.” Michael suspects she’s “fucking with him.”

Over to you, our sharp-eyed, keen-eared readers. Have you seen or heard “AF” in the wild? Do you ever say it, and if you do, how do you pronounce it? We’re eager AF to hear from you.

20 thoughts on “The further adventures of “AF””