At Strong Language we love creative swearing. But sometimes being creative means avoiding swearwords. When John Boorman and his team were filming Deliverance in rural southeast US, they faced difficulties not only in handling the unforgiving location but also in making certain scenes suitable for eventual TV broadcasting.

One scene in particular proved a challenge: Jon Voight and Ned Beatty’s brutal encounter with two sadistic locals in the woods. According to Boorman, the film’s producers suggested that he shoot the scene two different ways, so that there’d be a version suitable for TV. This meant, among other things, toning down the language in the working script.

That directive led to the film’s most famous line, spoken by Bill McKinney playing Mountain Man: ‘Squeal like a pig’ (squeallikeapig.com, incidentally, was McKinney’s website address). Boorman, in an interview about making the film, recalls: 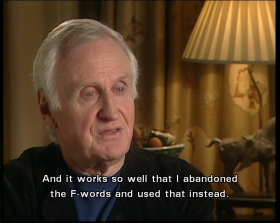 ‘Squeal like a pig’ – the line itself came about because [of] the need to do it for television, do a cleaned-up version. ‘Squeal like a pig’ was one of the things we came up with as being a kind of harmless thing that could be substituted for F-words. And it worked so well that I abandoned the F-words and used that instead. And it was more effective.

Boorman, you’ll notice, doesn’t specify who came up with the line – credit for it has been claimed by or attributed to various parties over the years.

Constraints can foster innovation, as any creative type will tell you. Here, you could say necessity was the motherfucker of invention.