By their euphemisms shall ye know them.

I am hardened – how not? – but I gather that motherfucker, that ‘Oedipal polysyllable’, remains the most (least?) popular of all the so-called ‘obscenities’. The dirtiest of the dirty, the least permissible among all the tabooed. Rivaled only by cunt, and of course far, far younger as a coinage, it is presumably the innate incestuousness that gets everyone’s knickers in a twist. This is not just to have sex, but to have sex with your, omigod, mother. It seems to have been an African-American coinage, of the 1890s, and it may even be that the extra distaste it elicits offers a smidgeon of racism. Like the impetus for America’s earliest cannonades in its war on drugs — the fact that cannabis was linked to Mexicans and cocaine to blacks was justification enough to condemn the products – the word may be double-damned by association.

END_OF_DOCUMENT_TOKEN_TO_BE_REPLACED

While the canonical adjuration as regards the sexual eligibility of nubile young (and as regards most statutory ages of consent almost certainly too young) women is usually found in ‘if they’re old enough to bleed, they’re old enough to butcher’, I offer a list of synonyms. These are drawn from the researches of my fellow London lexicographer Neil Crawford, who for 30 years has been compiling a database, ‘on historical principles’, of the language of sex. He sent them to me; with his permission I pass them on to you. END_OF_DOCUMENT_TOKEN_TO_BE_REPLACED

Once upon a time, well, 2008, I wrote a book that aimed to illuminate the stories that lay behind what some might term ‘dirty words’ and others dignify as the obscenities. It was entitled Getting Off at Gateshead and, once published, vanished almost wholly without trace.  One reason might have been the title, which was not mine, but a marketing decision. It is one of a number of synonymous references to alighting at the station ‘before the terminus’ and thus, somewhat ham-handedly, refers to coitus interruptus. That, wholly forgetful of the title, I had completed and submitted the manuscript prior being reminded that I might, perhaps, acknowledge this fact in my text may suggest my own attitude to such phrases. Hubris indeed and we know where that must lead. The book ran in alphabetical order. So if A was primarily for arse, and B for ballocks, C was for…and so it was. I offer, I hope for your delectation, a small excerpt; it covers a selection of derivatives, and a short, but unarguably focused story:

END_OF_DOCUMENT_TOKEN_TO_BE_REPLACED

Yet if ever slang bore witness to its dependence on synonymity, to its focus on themes to an extent that makes it inescapably clear that plus ça change, plus c’est indeed la même bleedin’ chose, it is in its lexis of self-abuse. As  I say, I cut over 50% of the terms I had, c. 2005, amassed. I cut across the whole vocabulary – one can only bind so many pages in a single volume – but no other topic suffered so substantially. Why? Because once one leaves the 19th century, and the vast mass of masturbation terms have been coined since 1900, many emerging a good deal later, there is little to differ between them. Of all topics it is perhaps the most unashamedly formulaic. Of course there are other tropes: through slang’s predominantly male gaze sexual intercourse can all too often be reduced to ‘man hits woman’; the penis, all guns, clubs, knives and daggers, is often a boy’s toy (though gaming imagery seems as yet to have been overlooked); the vagina a narrow, dark and threatening passageway: one almost expects to encounter Indiana Jones picking his way between its booby-traps. But slang’s development of fuck, prick and cunt offer images that have, I would claim, some degree of individuality. And equally important, some creative bearing on the topic in hand.

END_OF_DOCUMENT_TOKEN_TO_BE_REPLACED 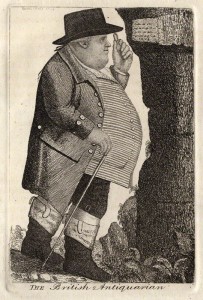 Francis Grose (1741-91), the militia-captain, antiquarian, and, most pertinent to our discussions, author of three editions – 1785, 1788 and 1796 – of that epochal slang dictionary The Classical Dictionary of the Vulgar Tongue, was, as illustrations underline, pleasingly aptronymic. Butchers, it was claimed, vied to proclaim his custom. He may (though disappointingly probably may not) have been strapped to his bed every night, lest were the weight of the Captain’s stomach to edge its way floorwards, it might be pursued by the rest of him. A man of flesh, he seems, perhaps indicative of his milieu and its era, to represent an alternative sense of gross: if not wholly coarse, then undoubtedly a pronounced inclination for matters distinctly corporeal.

Over his three editions he offers us 17 terms for penis (arbor vitae, matrimonial peacemaker, sugar-stick), 37 for vagina (crinkum-crankum, dumb glutton, the monosyllable), 56 for sexual intercourse (hump, pray with one’s knees upwards, shag) and 5 for gay sex (backgammon, fun, larking). Brothels, whores, madames and pimps, are all available. Jokes, puns, metaphors, Latinisms, euphemisms literary or otherwise. And there is ‘C**t the κοννώ of the Greek and the Cunnus of Latin Dictionaries, a Nasty name for a Nasty thing.’ Then we have ‘Burning shame, a lighted candle stuck into the parts of a woman, certainly not intended by nature for a candlestick.’ (The explanatory comment being appended, just in case we were uncertain, for the later editions.) Or ‘Nickumpoop, or nincumpoop, a foolish fellow; also one who never saw his wife’s ****.’ Predictably sexist stuff, but the Captain, we can safely say, is no prude.