We’ve had yet another month of record-breaking temperatures—and a corresponding spike in Google searches for hot as balls, 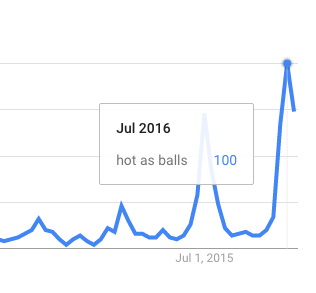 a phrase that’s gotten popular as balls (mostly in the U.S.) in the last ten years or so. Although Urban Dictionary has an entry for the phrase from 2001, it became undeniably mainstream five years later during the heatwave of 2006. Lin-Manuel Miranda and Chris “Shockwave” Sullivan created this video in response to the scorching weather that year: END_OF_DOCUMENT_TOKEN_TO_BE_REPLACED