Christmas has come early this year for business owners who want to sell their products using any goddamned language they like. Yes, the floodgates of retail profanity have opened in 2017.

END_OF_DOCUMENT_TOKEN_TO_BE_REPLACED

Sign languages are as expressive and systematic as spoken languages, and that includes taboo words. As Benjamin Bergen writes in What the F, ‘Signers use rules of grammar, some of them specific to profanity, just like speakers of spoken languages.’ There’s also great variation in how a given idea may be conveyed – not just between sign languages or their dialects but within them.

If Cory O’Brien’s terrific post on the middle finger in American Sign Language made you want to increase your rude repertoire in ASL, look no further. The video below features a host of signers demonstrating some favourite insults and profanities. It also shows how much fun swearing can be.

END_OF_DOCUMENT_TOKEN_TO_BE_REPLACED

My recent post on how a particularly obscene paragraph ended up on a local sports page inspired me to go back to a post I wrote in 2015, “When Shit Hits the Newspapers.” In it, I mentioned the enticing prospect that bullshit might have appeared in an American newspaper a few decades before that word started showing up in the writings of such luminaries as T.S. Eliot and Ezra Pound.

Slang lexicographer Jonathan Lighter noted on the American Dialect Society mailing list back in 2008 that there is a mention of a stage-robber in Las Vegas, New Mexico, named John “Bull Shit Jack” Pierce in Doc Holliday: the Life and Legend by Gary L. Roberts. Roberts seems to cite an 1881 issue of the Las Vegas Daily Optic on this point. Now that the Optic from that year has been scanned and digitized, it’s possible to check. Sadly, there is no “Bull Shit Jack” to be found, but the expurgated versions that did appear in newspapers of the era leave little doubt as to what his nickname actually was.

END_OF_DOCUMENT_TOKEN_TO_BE_REPLACED

Linguist John McWhorter, the new host of the Slate podcast Lexicon Valley, chats with Benjamin K. Bergen about why so many swear words are monosyllabic. (We’ve already preordered Bergen’s new book, What the F: What Swearing Reveals About Our Language, Our Brains, and Ourselves.)

END_OF_DOCUMENT_TOKEN_TO_BE_REPLACED

Celebrating U.S. Thanksgiving next week? Perhaps your guests would enjoy a slice of tofucken, that mischievously named concoction of tofu stuffed with tempeh and seitan. (Hat tip: Barry Popik.)

Eleven charts that will speak to anyone who really fucking loves swearing. (Hat tip: Mike Pope.) 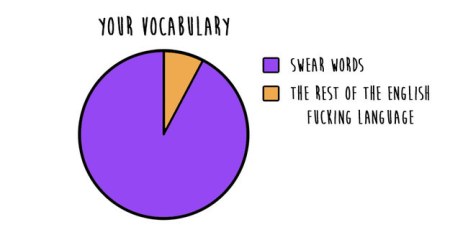