Swearing has long been identified with the military, source of so much slang, ribald chants, tribal insults, and other forms of strong language. Profanity would come into its own in war, aiding both bonding and catharsis: ‘an easement to the much besieged spirit’, as Ashley Montagu put it.

So routine was swearing in WWI that to omit it carried real force. In his 1930 book Songs and Slang of the British Soldier: 1914–1918, John Brophy writes, ‘If a sergeant said, “Get your ––––ing rifles!” it was understood as a matter of routine. But if he said “Get your rifles!” there was an immediate implication of urgency and danger.’

We can assume that fucking is the censored word. The spread of fuck through war is described in Ruth Wajnryb’s Expletive Deleted (2005):

END_OF_DOCUMENT_TOKEN_TO_BE_REPLACED

This is a guest post by Monika Bednarek, a linguist who has extensively analyzed US TV series. She is the author of Language and Television Series and the editor of Creating Dialogue for TV, a collection of interviews with Hollywood screenwriters. She has created a companion website at www.syd-tv.com and tweets at @corpusling.

The use of swear words in US TV series attracts a lot of attention. There are those who revel in creating mash-ups of swearing, and there are those who monitor and oppose swearing (like the Parents Television Council). Rules by the Federal Communications Commission restrict the broadcasting of profane and indecent speech to the evening and night and forbid obscene speech. But these rules don’t apply to subscription-based television such as cable or streaming services. Elsewhere I’ve looked at how frequent swearing is, but here I want to approach swearing a little differently. Basically, what I’m asking is: How do TV series use swear words? And what are their functions?

Let’s start with the first question. Most TV series do seem to use at least one swear word, especially if expressions such as oh my god are counted. But there are a lot of different ways in which TV series can handle swears. I’ve tried to catalogue some of these below.

END_OF_DOCUMENT_TOKEN_TO_BE_REPLACED

This is a guest post by Orin Hargraves, an independent lexicographer, language researcher, and past president of the Dictionary Society of North America. Orin is the author of several language reference books, including It’s Been Said Before: A Guide to the Use and Abuse of Clichés (Oxford) and Slang Rules!: A Practical Guide for English Learners (Merriam-Webster).

A few years ago I wrote about how collocations in fiction skew the statistics of collocations in a corpus because of their extremely frequent use; Ben Zimmer expanded on the idea in a later New York Times piece. In summary, the point is that a number of collocations would not be statistically significant were it not for their appearance in fiction. This is because writers of fiction—particularly writers of the amateur, unedited fiction that appears online—tend to reuse the same tropes and phrases so much that these effectively become clichés, formulaic ways of expressing the same (rather tired) ideas and events.

All of that came to light when I was working with the Oxford English Corpus, a well balanced and carefully curated corpus that, at the time, had about two billion words of English. These days I’m working with the enTenTen13 corpus, a web-crawled corpus of nearly 20 billion words, owned and made available by Sketch Engine. Sketch Engine’s web-crawler roves the Internet indiscriminately, pulling text from wherever it can be found. Like some grandmother aghast in Greenville, the web-crawler regularly comes upon sites with pornographic content. The difference between the grandmother and the web-crawler is that while she may avert her gaze in shock and dismay, the web-crawler grabs the text, parses and tags it, and adds it to the corpus. The result is that enTenTen13 houses a steaming, pulsating trove of pornographic writing.

END_OF_DOCUMENT_TOKEN_TO_BE_REPLACED

The British police drama Broadchurch can be gritty, uncompromising and bleak, but rarely sweary. Despite the grim events that rock the small coastal town, whole episodes pass without any strong language other than the occasional expletive shit or bloody hell. By the time that Cath Atwood gets coarse in S03E05, it’s because her husband and best friend’s affair has truly fucked her up: 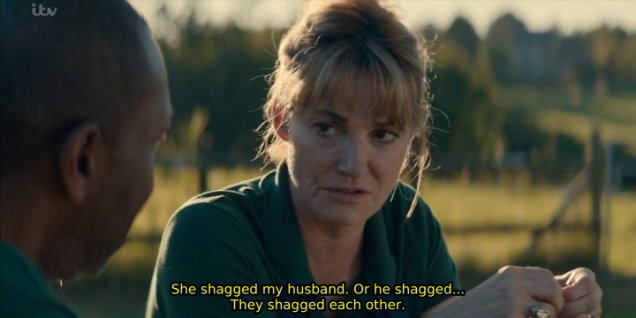