Shit, it’s fair to say, has happened since the dawn of time and the invention of shit. But the axiomatic acknowledgment “Shit happens” has a relatively short documented history and a long tail of puns, spinoffs, and commercial manipulations. Not to mention one famous fictional origin story.

“Shit happens” first appeared in print in 1978, according to The Dictionary of Modern American Proverbs (Yale University Press, 2012), which cited a line in Tragic Magic, a novel by the American writer Wesley Brown: “Once you know the reason why shit happens, you shouldn’t have to ask the question anymore.” In 1983, the linguist Connie Eble documented the saying in her annual roundup of slang used by students at the University of North Carolina–Chapel Hill.

But people had almost certainly been saying “shit happens,” and employing various euphemistic variations, for a long time before that. The Dictionary of Modern American Proverbs cites a 1944 usage of “stuff happens” that’s attributed to “Vic and Sade,” a popular American radio show of the 1930s and 1940s. The editors’ note on the “shit/stuff happens” entry observes:

The proverb commonly expresses a sort of stoic resignation at the vagaries and sorrows of life. Even though the citations for “Stuff happens” antedate ones for “Shit happens,” it is not unreasonable to suspect, in some instances at least, that stuff represents a euphemistic replacement of shit—stuff having been more acceptable in print (and in polite oral discourse as well). The “Shit happens” form achieved notoriety in the 1980s when its appearance on bumper stickers occasioned arrests and criminal prosecutions—giving rise to allusive (anti-proverbial) variants that substituted for shit the name of some disliked public figure or group.

You can still buy “Shit Happens” bumper stickers. This one’s from Café Press.

The 1994 movie Forrest Gump gave our hero (played by Tom Hanks) credit for coining the phrase.

This was an entertaining bit of fiction that proved useful for at least one person: the American film scholar Vivian Sobchack, who was inspired to write a paper, published in 1997, titled “Shit Happens: Forrest Gump and Historical Consciousness.” Here’s an excerpt:

With a reflective and condensed bumper-sticker irony that is also literalized (and with something akin to the “long view” of the Annales school of history that deals with “long-term equilibriums and disequilibriums” through the minute detailing of everyday life and its “conjunctures”), the film tells us: “Shit happens.” That is, rather than ignoring or denying history, Forrest Gump suggests that the temporally inflated notion of something we might once have called the “historical event” is in some fashion now deflated—its specificity reduced to generalized matter not because events are now considered merely trivial, but because they have become indeterminate in their boundaries and undecidable in their “eventual” historical importance.

Meanwhile, I’ve done my own semi-scholarly labors and come up with a big Shit Happens catalog.

The original Shit Happens list was theological (“Taoism: Shit happens. Hinduism: This shit has happened before. Nihilism: Who gives a shit?”). The late, lamented Maledicta (“the international journal of verbal aggression”) compiled a more extensive version in 1996; it included some occupational definitions (“Linguist: What I’m doing is a bunch of feces tauri”), branded variations (“McDonald’s: You want fries with your McShit?”), and now-quaint computer definitions (“Fortran: It’s shit but I don’t know any better”).

Sometimes the pun is in a title rather than a business name:

I owe this term to my colleague in naming, Christopher Johnson, who coined it from awkward and wordplay.

Spotted at a BART station in December 2010. (See my post about this slogan and others.) 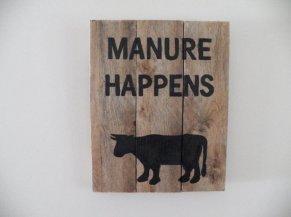 Then there’s Poop Happens, used by too many hey-aren’t-we-clever businesses to enumerate. Some — like this one, in Fort Wayne, Indiana — are dog-waste-removal services. 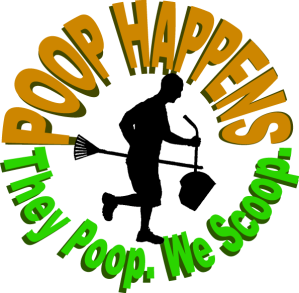 Our little gift to the world. You’re welcome.

“Galal yikreh et kulanu”: literally, the rather formal/Biblical “Dung will happen to all of us.” A more colloquial substitute for galal would be hara, a borrowing from Arabic. Via Cafe Press.

And when words fail, you can let emoji do the swearing. 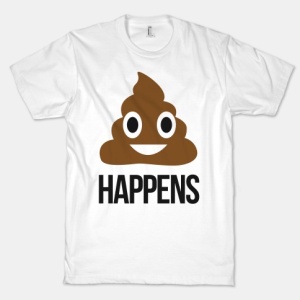