We’re delighted to share an extract from the new book From Skedaddle to Selfie: Words of the Generations by Allan Metcalf. It will be published next month by Oxford University Press, which describes it as “a lively look at the words that have come to define different generations in history” – including fuck.

Even major dictionaries declined to include fuck until quite recently, yet it now appears without fuss in an impressive range of cultural domains. So how did fuck make the leap? In the text below, Metcalf traces the word’s emergence out of largely disreputable use into ever more mainstream contexts.

As Boomers grew older, most of them left hippiedom behind, taking conventional jobs, dressing conventionally, leaving bell-bottom pants and tie-dyed shirts in the back of closets for their children to wonder about. Hippie language too became dated, especially groovy as a synonym for cool.

But they had instigated a major change in the English language, bringing fuck and other four-letter words out of the closet.

By no means was fuck a new word. The Oxford English Dictionary shows examples from as far back as 1568, and says the word is likely to be older but unattested because it has been “one of the English words most avoided as taboo.” Dictionaries avoided it, even the biggest and most comprehensive like the Oxford English Dictionary itself (before 1972) and the “Unabridged,” Webster’s New International Dictionary of 1961 that shocked reviewers for its supposed permissiveness. Fuck was used plentifully enough where dictionaries feared to tread, in men-only conversations and particularly in the military. The World War II military acronyms SNAFU and FUBAR, explained euphemistically as “situation normal, all fouled up” and “fouled up beyond all recognition,” are evidence of that earlier taboo use. Women for the most part avoided it altogether.

All that changed beginning in the 1960s, thanks to the Boomers. Nowadays fuck is heard and seen in many contexts, freely used by women as well as men, often in movies and novels, and with concomitant lessening of its shock value. Nowadays a clusterfuck is just a term for everything going wrong, and Bumfuck is a well-known nickname for a small town in the middle of nowhere. A style of high-heeled women’s shoes is now known as fuck-me pumps, with help from a 2003 song of that name by Amy Winehouse. The term is so familiar that it inspired a cartoon in The New Yorker of a woman saying to a shoe store sales clerk, “I need a really great pair of marry-me pumps.” There are also CFMBs, come fuck me boots.

Exactly when and how did this seismic shift in the English language take place? In this case, I think it’s possible to pinpoint the flap of the butterfly wings that rippled out to cause such a storm of change.

The time was the morning of March 3, 1965. The epicenter, the place from which the change spread, was in Berkeley, California, at Telegraph and Bancroft Avenues, the southern entrance to the University of California campus. And it all began with a sheet of paper on which a young man had written the word fuck.

All eyes were on Berkeley at that time, filled with Boomer undergraduates, because of the student-led Free Speech Movement that had resulted in victory for student activists the year before. With nonviolent sit-ins and marches, during the fall semester 1964 they had persuaded the university to lift its ban on political advocacy at the edge of campus. Just as the F.S.M. had spontaneously attracted wide support from students, so it spontaneously disbanded when its work was done.

What does this have to do with language and generations? The lofty and virtuous F.S.M. was the background for a decidedly unlofty protest during the relative calm of the semester that followed.

John Thompson, a drifter and would-be poet, best characterized as a “slacker” before Generation X reinvented the term, on that morning in March was sitting on a planter at the edge of the main entrance to campus. Just to get a little attention, hoping even to enhance his reputation by getting thrown in jail, he wrote FUCK on a piece of notebook paper and held it up.

Nothing happened at first, but after a while a “frat guy” came up, angrily took the paper and tore it up. After he left, Thompson calmly wrote another, more elaborate and academic sign: “FUCK (verb).” And after another while the frat guy came back with a policeman, who arrested him.

And thus a new cause was born. It was soon labeled another F.S.M., the “Filthy Speech Movement,” much to the delight of the hippie Boomers, much to the disgust of certain high-minded civil rights and antiwar activists, the responsible members of the Silent Generation.

Holding up the sign was a Boomer thing to do. Thompson, born in 1942, was one year too old for Boomerdom, but younger Boomers began to follow his lead. Not by holding up signs with four-letter words, but by casually using them, nice middle-class boys and girls who up till then would not have filled their mouths with words like “fuck.” With his sign, Thompson had found another way to shock the establishment. Abbie Hoffman summed it up in the title of his 1967 book, Fuck the System.

Over the course of a decade or so, the shock waves spread so widely that they no longer shocked, and “fuck” became merely an edgy word rather than a shockingly taboo one. Authors like Hoffman discovered that they could get attention by using the word. So did Michael McCloskey in his 1968 volume of short stories simply titled, Fuck You.

The generational effect is evident in the dialogue from a 1969 collection of short stories, Nightwork by Christine Schutt. “What are you writing?” a mother asks her daughter. “Fuck fuck fuck fuck fuck for pages,” says the daughter, who “seemed happy to say it, fuck.”

Erica Jong made a name for herself with her 1973 novel, Fear of Flying, notable for her coinage of the term zipless fuck, “absolutely pure” and “free of ulterior motives,” where “zippers fall away like rose petals.”

The spreading use of fuck is a dramatic moment in a 1980 book Voyeur Wife by Nick Eastwood. Cheryl, a suburban wife, spies on her sister Amy as she says to her husband, “are you going to go on teasing me, darling, or are we going to fuck?” The book continues:

Cheryl stifled a shocked gasp. She hadn’t known that her stylish, rich older sister used words like that. Their upbringing had been very strict, and Cheryl personally did not approve of dirty language.

Where had Amy learned such filthy words? . . . this was not the prim college girl that Cheryl remembered. Her sister was behaving like a common slut.

Dictionaries began including the word in the 1970s, with the realization that people would be more likely to buy dictionaries than to banish them if they included it. The American Heritage Dictionary of 1969 was one of the first. Even the famously prudish New Yorker finally accepted fuck on its pages beginning in 1985. 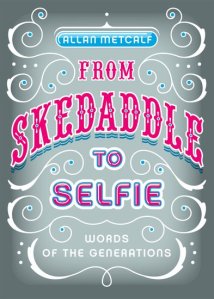 Allan Metcalf is professor of English at MacMurray College, executive secretary of the American Dialect Society, and contributor to the Chronicle of Higher Education’s Lingua Franca language blog.

From Skedaddle to Selfie is his seventh book (following the excellent OK: The Improbable Story of America’s Greatest Word). It is excerpted here with permission from Oxford University Press USA. Copyright © 2016 Allan Metcalf and published by OUP USA. All rights reserved.

Thanks to Nancy Friedman (also of Strong Language) for her help in preparing this post.

37 thoughts on “How “fuck” went mainstream”