First things first. For fuck there are seven and a half columns of entries, beginning with (of course) fuck as a noun — which, actually, gets fewer than two of those columns to itself as a noun — and ending with fuck you and its sub-entries of “fuck-you money,” “ fuck you, Charley,” and “fuck you, Jack, I’m all right.”

Now that that’s out of the way (I know you assholes, you always look for fuck first in any dictionary you open, just so you can point and giggle like you were 12 — and some of you are 12, so yeah, okay), I can move on to the actual review.

Be aware that this book was completed in 2008. Green later produced a three-volume, fully cited work in 2010. However, this title can be had for about $25; the three-volume set runs about $600. I don’t know what your budget is, but mine says “get the smaller, less pricey one, okay? Thanks.” Unless you’re running a library, you’ll probably do just fine with this one and an internet connection for the newer material. For myself, I have a greater need for the older words because my editing projects tend toward historical fiction. I don’t need the Urban Dictionary. I need something like this, or more esoteric materials I probably wouldn’t pay for but can find online (18th-century naval slang, anyone?).

Of greater interest to me than the actual entries is what Green has to say in his introduction. There you’ll find the usual “how this book is organized” and “how we settled on dates” and “where we sourced this information” and also a section on “Insult and offence.” THAT is what I found fascinating. We all know slang is about the burn. It’s about fucking with people’s sense of self-worth. It’s about talking shit both behind their backs and in their faces. It’s fucking offensive. What interested me about this section is the discussion of how “offensive” has changed over time. What was taboo in 1937 (the publication date of Eric Partridge’s slang dictionary) is no longer such in 2015, nor was it in 2008.

The name Eric Partridge may not mean anything to you, but you might want to do an internet search so you won’t remain clueless. He’s another slang lexicographer, whom Green calls “my great predecessor.” For Partridge, the language of insults was quite acceptable (nigger, queer, wog, etc.) but writing out terms for bodily functions and sex was taboo. Therefore, in his work you’ll find “shit” as the main entry (because it’s a dictionary, yo), but its related terms blank the vowel (“s–t-stirrer”). Green points out that this was in keeping with the culture of the time, and nothing more or less should be inferred from it. Partridge’s work is a product of its time, and so is Green’s.

Green says “Slang is as it is, and what it is is largely cruel.” True dat, as they say. It’s here in all its cruelty and glory, with no pulled punches. Descriptive, not prescriptive: this is language as it is used, whether we like it or not. He suggests, furthermore, that the 21st-century taboo is that of “the politically incorrect terms of racism and sexism.” Taboos have moved (I won’t say “progressed,” because “progress” is a different concept and one that not everyone might agree applies here) from blasphemies in the 1700s through bodily functions and body parts (the “dirty words,” as Green points out) to the -isms. Makes sense to me. I don’t fear telling someone to fuck off. I fear using the wrong word to describe their skin color, their sexual identity, their gender identity . . . I fear talking about people. Not to them. And that’s a different article entirely for a different blog entirely, I think.

[returns after about a quarter hour of digging] I can’t seem to find the phrase “shits and giggles” in this book. I’d started a paragraph with the phrase “Just for shits and giggles,” decided to look it up, and am shit out of luck. (In that phrase “shit” acts as an intensifier. That one’s in the book.) And of course I have no fucking clue what I was going to say now, either. Shit for brains. (That’s in the book, too.)

Anyway. For my money this is well worth the price. I prefer using printed, bound reference books to looking at online resources. It’s just how I am. If I could afford a few hundred dollars I would spring for the three-volume cited work, but I’m not wealthy and I don’t run a library. The Chambers Slang Dictionary is logically organized with nested entries and is clearly cited, down to country of origin if it’s not England. Sure, you can find this kind of information online, in various presentations.

But sometimes it’s more fun to get lost in the pages. 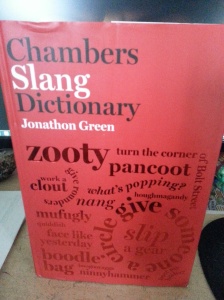