It’s been just about four years since I published my first post about commercial sightings of “AF,” the abbreviation for the intensifier as fuck. And my, how far we’ve traveled since 2015: from festival T-shirts and Etsy geegaws to subway ads, a Netflix movie, and a surreal bidet commercial. We went back and forth on pronunciation: one-syllable word or initialism? (The latter, it would seem.)

And now we find ourselves, and AF, in the middle of Main Street, USA.

To be precise, the personal-care/feminine-hygiene aisle of Target.

From the Down There Wipes product description on Target.com:

Goodwipes Flushable Down There Sensual Seducation [sic] Cleansing Wipes are the game-changing self-care item you never knew you couldn’t live without. Our individually-wrapped, flushable feminine wipes are convenient, portable and discreet! So much better than dry, scratchy toilet paper, our hypoallergenic wipes are gently cleansing, perfectly moisturized, super-soft and made with natural ingredients that leave you feeling clean, comfortable, confident and refreshed – never sticky, soapy or itchy. Great for periods, sweaty adventures, & all restroom activities (ABCs, 123s)! Because, truly, does TP actually leave you feeling clean? (BTW…remember when you got stuck with zero TP?!) Never again, girl. We’ve got your back (and your front!)

The prominent display of “AF” is just one of the boundary-pushing, sassy-as-fuck elements of Down There wipes. Another varietal (scent? flavor?), Shea-Coco, instructs the buyer to “treat your va-jay-jay like it’s on vacay.” 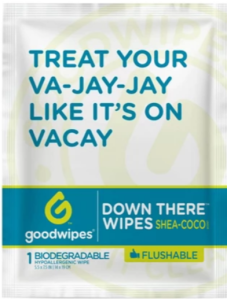 “Va-jay-jay” was popularized by TV producer Shonda Rhimes, who used it in a 2006 episode of her hit show “Grey’s Anatomy” when network censors wouldn’t permit vagina in dialogue. But the word had already been circulating for a number of years by then. A 2007 New York Times article about va-jay-jay (also spelled vajayjay) quoted the linguist John McWhorter: “The reason that vajayjay has caught on, I think, is because there is a black — Southern especially — naming tradition, which is to have names like Ray Ray and Boo Boo and things like that. … It sounds warm and familiar and it almost makes the vagina feel like a little cartoon character with eyes that walks around.”

“Down there,” a euphemism for the genital area, is also slightly risqué. The earliest citation in Jonathon Green’s  Dictionary of Slang is Henry Miller’s Sexus (1949): “The only thing that bothered her was that she seemed to grow larger down there with each abortion.” In a series of emails to me, Jonathon, aka Mister Slang, sent several earlier citations from child-rearing manuals, including one from 1917. And he added: “My sense is that it would have been originally used by strict childminders (parents, nannies, even schoolteachers) as a euphemism freighted with a certain degree of negative implication, even threat (inference of that other ‘down there’, i.e. hell, which of course is a slang term for vagina too.)”

“Down there” is making inroads in the language of commerce. Although I couldn’t find Down There Wipes in the trademark registry, I did find 24 other filings for unrelated examples of DOWN THERE, including DownThere Facial Wipes (“gentle cosmetics for use specifically around the vaginal area”) and Man Care for Down There, for various bathing products. Evidently the U.S. Patent and Trademark Office finds the term neither scandalous nor offensive.

And neither, by the way, does Cottonelle, an unrelated brand of toilet paper and flushable wipes. Cottonelle, which is owned by Procter & Gamble, launched its Down There Care ad campaign in February 2019.

Down There Wipes are just one of the products sold by Goodwipes, which is based in Atlanta and whose About Us page tells us the company was founded in 2013 by Sam and Charlie, who had been heckled by their fraternity brothers for always wiping their butts with baby wipes. (Yes, this bit of TMI is on the website.) Now they’re on a mission—a hygiene revolution, they call it—to help everyone “feel fresh a.f. wherever you are.”

They are clearly having a lot of fun with slang like “vacay” and wordplay like “vagenius.” (The wipes are for external use only, but I suppose vulvagenius doesn’t have the same ring-a-ding-ding.) And don’t miss the tiny type, which tells us what the real taboo word is. Yes, it’s that red alert for the word averse, “moist.” Don’t call them that.

Hat tip to my Visual Thesaurus colleague Orin Hargraves, who told me about Down There Wipes.